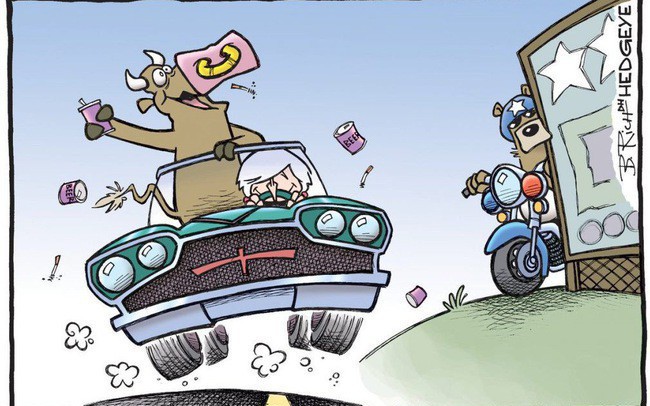 Green returned to Vietnam stock market after many weeks of lack of active trading.
1. VN-Index gained

After the strong decline at the beginning of the week, the chain dropped from the end of May, the market quickly regained the green color and returned to 950 points. Last week, VN-Index kept at 958.28 points, up nearly 5 points compared to the opening session of the week. Meanwhile, HNX-Index closed the week at 104.21 points, down slightly by 0.1 points.

The last trading week was considered positive when VN-Index returned to green, up 3/5 trading days, after a series of declining sessions lasted from May 21. The highlight of the trading week is that the bottom-fishing cash flow has appeared more clearly, participating in pushing prices instead of just buying low prices as before, a signal that the market may have created a bottom and a recovery. come back. 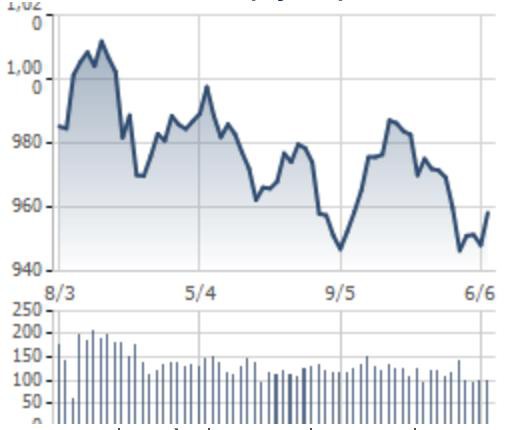 Fluctuation of VN-Index in 3 months

At the opening session of the trading week, VN-Index dropped more than 13 points, pushing this index back below 950 points, approaching the support level of 945 points. The negative state is pushed up when the risk of breaking important support may push the HoSE representative index down to 930, even further back. Although the index plunged, the demand still remained cautious, not catching bottom at all costs.

In the next two sessions, the trading returned to a more balanced state, the sellers did not drastically lower the price as before while the buyers started to enter the market, although the pace was still slow. At the end of the week, the trading was pushed up when the big cash flow pushed up the price of stocks, VN-Index in the last session of the week increased by more than 10 points, one of the rare sessions with two-digit green color.

The focus of the last trading week came from industrial zone and textile infrastructure stocks. While oil and gas stocks were negatively affected by world oil prices, the cash flow started rotating to other groups. At the weekend session, MSH was pushed to ceiling price with high liquidity, many industrial zone stocks like TIC or SZC also pushed to the ceiling or close to the ceiling price. In Bluechip group, active trading in stocks of Vingroup they supported the index’s gain.

With returning to the 950 mark and approaching 960, the market is expected to continue the recovery trend. Entering cash flow is an important condition for determining a clear trend. However, the higher the height, the greater the amount of “stock” stock.

After many ups and downs in the low price range, the psychology of investors from profit expectations will turn to how to get rid of goods by cost price. This means more stock supply will appear. The important thing is that the level of maintaining the demand is enough to absorb the supply of hills from the market. Positive information on semi-annual business results may be a factor to help the market more excited, after a long period of “empty information”.

Shares of major technology companies rose again at the beginning of the week. Evidence of a slowdown in the US economy adds to the hope for a change in Fed policy. The US Department of Labor reported on Friday morning that there were only 75,000 new jobs in May, the weakest data since February this year. Unemployment rate remained at 3.6%. Average income also increased less than expected.

Last week, the most influential news to the market was President Mario Draghi’s speech that the ECB would delay the rate hike for at least six months and provide long-term refinancing, called TLTRO. , to stimulate the region’s financial system with cheap loans to banks. ECB will keep interest rates until mid-2020. ECB is also willing to use all available tools if the slowdown in production begins to affect other areas of the economy.

The Japanese stock market also returned to positive in the week, ending four consecutive weeks of decline in May. During the week, the Nikkei 225 index closed at 20,884 points (up 1.37%), the Yen was also fine. fixed at 108.48 yen / US dollar.

The World Bank cut Japan’s growth forecast for 2019 to 0.8%, due to the impact of the US-China trade war. The report shows that Japan’s economic activity is still weak, especially on exports to China, while the increase in value-added tax expected in October may slow the economy further. half. However, the report notes that Japan’s unemployment rate is still low, and the service sector seems to remain well. It is forecasted that the World Bank’s economic growth for Japan in 2020 will remain unchanged at 0.7%.

Mainland China stock market continued to decline to near the low level in the last four months when trade tension with the US showed no sign of cooling down. The Shanghai Composite Index closed at 2,827 points (down 2.45%). Meanwhile in Hong Kong, the Hang Seng Index closed at 26,965 points (up 0.24%). Last week the Chinese mainland and Hong Kong stock markets closed on Friday for the Dragon Boat Festival and will reopen on Monday, June 10. Stress took place during the week when China stepped up retaliatory measures against the US to deal with the latest escalation of the Trump administration’s tariff.

Meanwhile, further signs of China’s economic growth slowed, increasing the likelihood that Beijing will launch more stimulus packages. On Wednesday, the International Monetary Fund cut its forecast for 2019 growth to 6.2% from the previous 6.3% estimate and projected a growth of 6.0% in the year. next.